All New Yorkers are urged to immediately OPPOSE the NY Senate Bill S1979.  Select “NAY” and let your senator know you do not support this bill.  There are federal laws which already cover commercial and recreational use of UAV / Drones / RC, there is no need for any more.  It will create confusion and additional unneeded hurdles for those that fly.  Please spread this to all NY family and friends, get the word out. 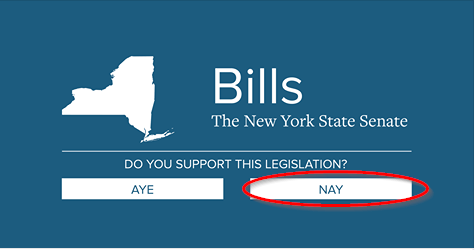 TITLE OF BILL : An act to amend the penal law, in relation to
unlawful use of a drone

This bill creates the crime of unlawful use of a drone.

Section one of the bill amends section 240.00 of the penal as it
relates to the definitions of drone, restricted airspace and personal
use.

This bill would provide reasonable regulations for the personal use of
drones. Currently, the FAA has banned commercial use of drones as it
develops guidelines which are expected to be released at the end of
2015. Although commercial operations are regulated, the FAA does not
govern recreational drone use therefore leaving it wholly unregulated
and susceptible to reckless use by civilians. There have been many
instances over the past several months of drones flown irresponsibly
in close proximity to airports and bridges. This bill would ensure
safe and proper use of drones by establishing reasonable restrictions
that protect the public.

None to the State.

EFFECTIVE DATE :
This act shall take effect on the first of November next succeeding
the date upon which it shall have become law.

Good news, looks like everyone’s efforts have paid off. This bill has been shelved.